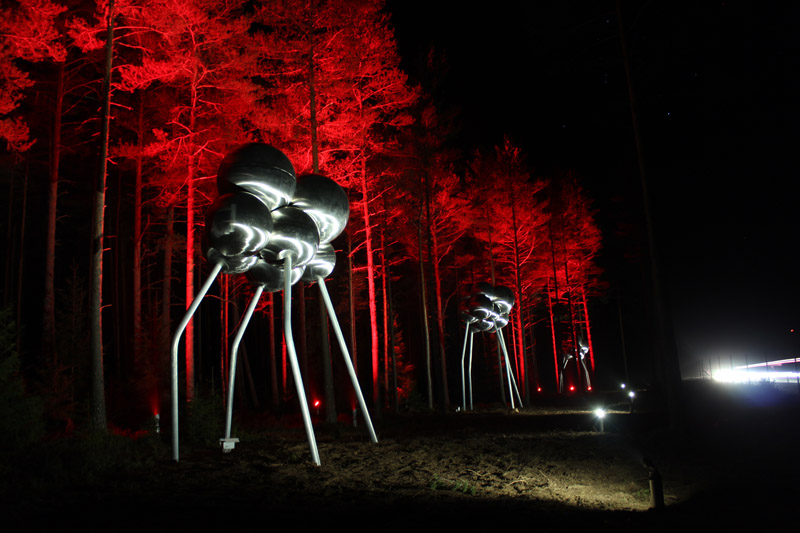 The concept is about being on the way. It is also about meetings. The fact that people or goods are on their way may be due to a variety of reasons, such as work trips, relocations, tourism or commodity logistics. Meetings between people may be planned, spontaneous and sometimes unexpected.
The meeting is also taking place between nature and the city, man is on the way in the border between the landscape and the infrastructure.
Three objects, three animals or maybe three vehicles are heading in the same direction as the highway just outside the wildlife fence.
Are they a flock of wild animals on their way to new hunting grounds, or is it a caravan full of goods packed in round containers on their way to Vaggeryd? Or are they the latest forestry robots with the task of planting new pines? They ask questions, start conversations and discussions and maybe generate dreams. They are a family, part of a flock or perhaps a small branch in a multinational company?

We are constantly on our way in a society that is constantly changing. Where are the three characters going? Where are you going?

Lighting is an important part of the design and consists of two parts. The sculptures are illuminated from the front with white light as an actor in a theater scene. It is a colored upward light in the underlying trees. It becomes a scenography with a fund and focuses on three characters in an ongoing spectacle. One can also think of associations to energy fields that surround and follow the three figures.